There’s this girl I like. She’s got a boyfriend and he sucks, and she likes me a lot. But she also thinks I’m a player. Like an idiot, I might have just proved her right, because I got quite drunk at a party we were both at, and hooked up with another girl at that party. She then got mad at me for hooking up with someone else, even though we’re not dating.

Dude, thank you so much for the question. I turned it into a blog post, because I know a lot of geeks end up in a similar situation. The discussion we have could end up helping many of them out.

She has a boyfriend

Let’s start with the basics: this girl has a boyfriend.

In case you missed it, she’s not dating you: she’s dating someone else.

As a ground rule, if a woman is seeing someone else, you don’t owe her anything. Any judgment she casts on you doesn’t matter, because you’re not her boyfriend.

She doesn’t have the right to stake her claim on you, or prevent you from hooking up with anyone else.

As is, you know what you are to her? Her backup plan. 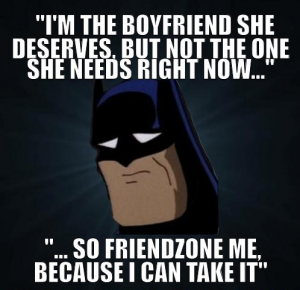 Sure, things may not be going well with her boyfriend, but what are you supposed to do? Sit around holding your balls hoping she’ll dump him for you? Please, you’re worth more than that.

I know you’ve been reading my blog for a while. This means you’re interested in self-improvement, which is a big deal in this modern world of watching TV and doing nothing after work. You’re working hard on yourself, and becoming a better man. You’ve got a lot to offer.

Plus you’re a geek, and that makes you rad.

The only thing is, you’re probably falling into the nice guy trap, where you cringe when a woman gives you the stinkeye or says something mean to you, even when she’s wrong.

The problem with this type of girl is that she’s not an overtly bad person. She hasn’t cheated on her boyfriend with Winfred. No secret kisses, or behind the back love affairs going on.

Thus it’s easy to think she’s a good girl in a crappy relationship, and her boyfriend is a bad person. That’s why Winfred said, and I quote, “she’s got a boyfriend and he sucks.”

But you don’t know that for sure, do you? If he sucks so much, why hasn’t she left him yet? Curiouser and curiouser.

It doesn’t matter what she tells Winfred, how much she loves spending time with him, and how great hanging out with him is. These are all merely words.

Her actions reveal the sad truth about her. She wants the affection Winfred is offering, without giving him any commitment. She’s also cheating emotionally on the man she’s dating.

This is a perfect situation of someone trying to have her cake and eat it too. She’s got her boyfriend for sex and dinners and whatever. She’s got Winfred when her boyfriend doesn’t treat her well.

You know what Winfred has? 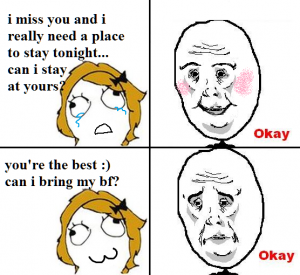 He gets empty promises. He can’t hold her, kiss her, have sex with her, or get emotional support from her.

All he gets from her is the jealous treatment if he goes for another girl. So, in fact, I was wrong. He does have something: a jealous woman who doesn’t want him to hook up with other people, but doesn’t want to commit to him either.

What you need to do

Alright Winfred, back to you my friend. You asked me what you should do, and I will give you an answer.

You need to cut her out of your life, for a few reasons.

First off, if you’re hanging out, and you like her, you’re not going to be meeting anyone else. That’s a problem, because you’ll be pining after someone you can’t have, and might miss out on another wonderful girl that’s into you (and doesn’t have a boyfriend, which immediately makes her better than this one).

Second, if she hasn’t had the balls to leave her man for you yet, it ain’t gonna happen. And if she does, and you end up dating, will you trust her knowing that she left her previous boyfriend for you? Or will you constantly be worried that when things get rocky, she may leave you for the next Mr Nice Guy with a shoulder to cry on?

Look her in the eyes, and say this:

‘I’m not your boyfriend. You already have a boyfriend. I’m not waiting around for you to decide that maybe you’re going to break up with him for me. I’m worth more than that, and I deserve better than to be your backup plan. If you were single, and over him, we would be talking about getting together. But I will not be your “just in case”.’

Then move on with your life. And for the love of baby Mario, stop falling for girls that have boyfriends.

Next Post: You Can Be Bitter About Women, Or You Can…