Life is full of obstacles. Even the best of us have to struggle with them at some point. In my experience, geeks tend to be good at the struggle, because they’re used to encountering obstacles and overcoming them.

It comes with the territory when you play hard videogames.

It’s why I believe geeks are so well equipped to overcome obstacles that revolve around dating. You’ve done it thousands of times while playing games, it’s simply a matter of reapplying those skills to the real world.

Sometimes though, I hit an obstacle that requires some really thick elbow grease. Maybe even seems insurmountable. When that happens, I have one childhood memory that I fall back on, one that proved to me beyond all doubt that I have what it takes to win.

It’s my reference point whenever I have a problem I need to tackle, be it getting back out there after being rejected, or powering through a difficult task to get to the good stuff.

It all began with Zelda II: The Adventure of Link.

The Adventure of Link Rami

Over 20 years ago, I played Zelda II as a child, and had a blast… yet I still vividly remember one part of the game that had me pulling my hair out.

Two weeks into the game, after fighting my way through awesome baddies and genius puzzle after puzzle, I entered a village: the Town of Saria. Protip: recognize the name?

It was wonderful… until I was confronted with this piece of shit.

It was a river that I couldn’t jump across, aka The Gap From Hell™. Even with a running start, it was impossible. This is every platformer’s nightmare.

“But… Nintendo make good games,” I thought. “There must be a proper solution.”

I couldn’t find it. The guy in the green hut by the river said only townsfolk could cross the bridge. I spoke to all the townsfolk, and none of them could help me. I tried exploring nearby villages. I tried different magic spells. I tried going into every house and pressing every button. I tried smearing peanut butter and banana on my chest and invoking a blood ritual to the almighty chicken god to give me a clue.

Frustrated to tears, covered in delicious peanut butter and banana, I asked around, hoping one of my friends could help me. Remember, this was back in 1991, before the Internet, and I didn’t have a subscription to Nintendo Power to help me out.

At this point, most people would’ve quit. To be fair, I almost did.

Then I had another thought: what if I missed something along the way?

I woke up the next day, and thought about the problem. If I missed something, then the best way to find it was to backtrack.

Only one solution then: I was going to beat the game by taking it apart, piece by piece.

That meant going through the entire world map, and exploring every single space on there, from beginning to end, until I found a solution.

In case you’re wondering how big that is, here’s the scope of what I was attempting: 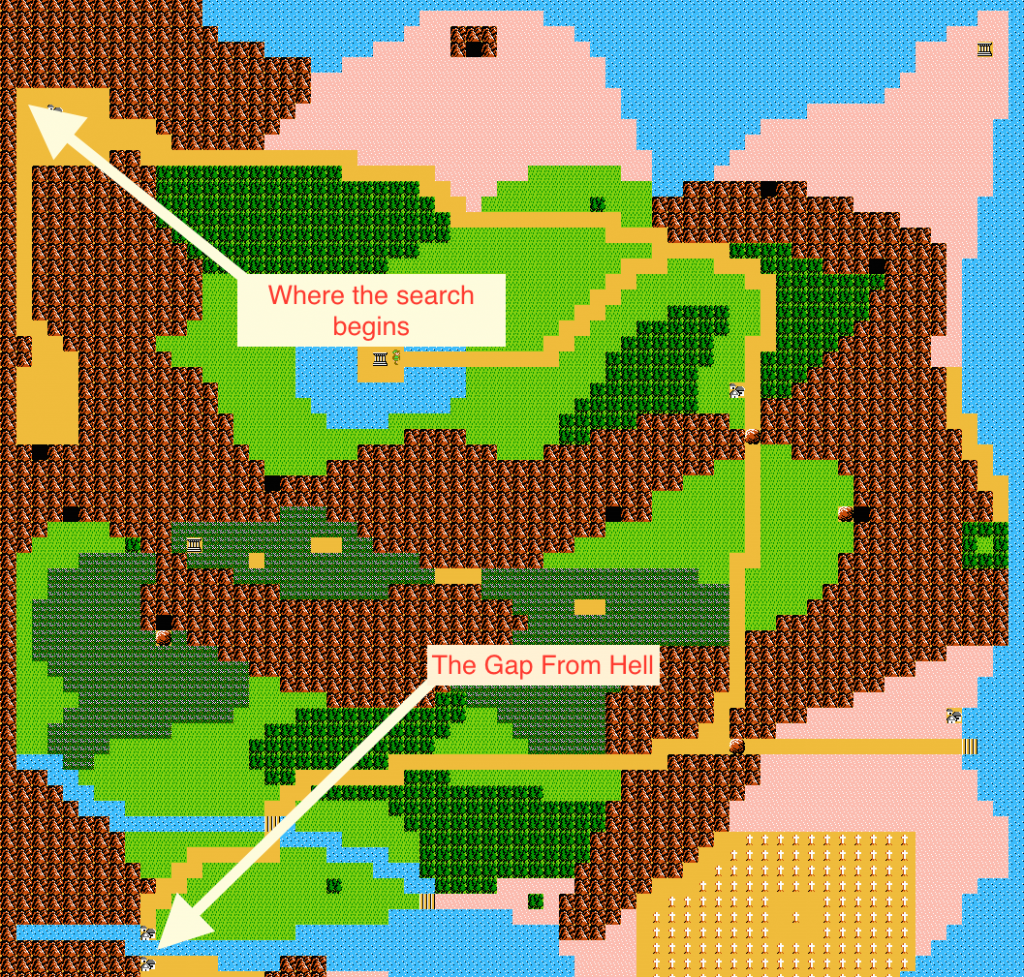 Yep, it’s fucking gigantic. But that didn’t stop me.

I kept a notebook with sketches of every area I went to, and placed an X on every square of the map I visited.

It took days of walking, stopping, fighting random enemies, forgetting to mark an area, backtracking, and what we geeks now know as grinding.

On the 3rd day, like some kind of tired geeky Jesus, I rose from my peanut butter and banana induced sadness and stumbled upon a secret village, one unmarked on the map. Here’s where it was located.

I walked in, and there was a guy who said:

And just like that, the river man in the green hut built me a bridge and let me cross the gap.

I did it! All it took was hard work, patience, and the perseverance that only children and people with OCD can muster.

From that point on, and for the rest of my life, anytime I encountered an obstacle that seemed hard to overcome, I referred back to my childhood Zelda II adventure.

What does this have to do with life obstacles?

For me, there are two things that make some parts of life extremely hard: fear of failure, and the constant rejection.

For instance, in dating, you have to get rejected a lot. It comes with the territory. If you’re not getting rejected, you’re not really going after the right kind of girl, or pushing your boundaries. But rejection sucks.

Same thing when you’re on a job search, or applying for a grant, or pushing for a new idea in your DnD group. There are so many moments in life filled with rejection.

So how do I deal with it?

I use that same perseverance that I learned while wandering the Zelda II overworld and drawing a map.

And you can too. Everytime you hit an obstacle with women, work, or life in general, remember the hardest game you’ve ever beaten, and realize it was probably harder than what you’re currently facing.

I mean seriously, if you can take down One Reborn from Bloodborne, Ridley from Metroid Prime, or the final boss from Ninja Gaiden, then you can apply for that dream job, or lift that extra weight at the gym.

You can do it. I believe in you.

Previous Post: She likes me, but she has a boyfriend. What do I do?

Next Post: How to Never Run Out of Things to Say When You Talk to Strangers