I’ll keep this short. I recently had a conversation with someone who sincerely believes that videogames are the source of all evil. I obviously disagree. Being that this is geek month, I have decided to stand up for my fellow gamers, and post two videogames related articles this week. Be sure to check back on Thursday for the other one!

A short list of Special Moves I learned from videogames:

1. Perseverance. If you grew up in the Nintendo generation, you know one thing about old games: they are damn hard. And I’m not talking “replay the same level once or twice hard”. I’m talking bang my head against the wall, break a couple of controllers, scream at the screen in frustration, pull out my hair, want to die, cry myself to sleep, eat a brain for breakfast hard.

This led to me developing one important skill that would serve me continuously throughout my life: the ability to plow forward in the face of adversity. If I gave up every time I got to a difficult level, I’d never have gotten past the beginning of most NES games. This also applies to life. I have yet to meet a problem I can’t overcome by gritting my teeth and persevering. The thing is, that’s not enough to win a game. You also need…

obscure with their clues. Anyone who’s ever played Zelda 2: The Adventure of Link will agree that the Error puzzle was just retarded. So, to figure things out, I was always required to think outside the box and use a little bit of creativity. When you’re coding, scriptwriting, or even arguing a case, having the ability to reframe problems and work at them from different angles is pure magic.

3. Increased Memory for Detail. If you don’t remember where the door with the demon head was, how are you supposed to figure out where the skeleton key goes? I definitely use this skill to remember important things like CSS code, qualitative methods theory, and where I left my wallet.

4. Fast learning. Perhaps the most important skill required to be a great gamer is the ability to constantly learn new patterns, concepts, and ways of thinking. Also, to do it fast. When you’re playing the final boss in Contra, you’ve only got 3 lives and a couple of seconds to figure out which way he moves, shoots, and reacts. If you don’t, you’re dead. This ability is responsible for my plethora of random skills, from playing the harp to cooking thai food. It also led to me becoming quite the multipotentialite.

5. Lightning reflexes. This one is easy. The first time you fight Vega in Street Fighter II, you’re gonna get schooled. The only way to beat that fucker is to develop fast enough reflexes to Shoryuken him every time he jumps off the wall towards you. For those of you not familiar with the shoryuken, please read the following instructions carefully: 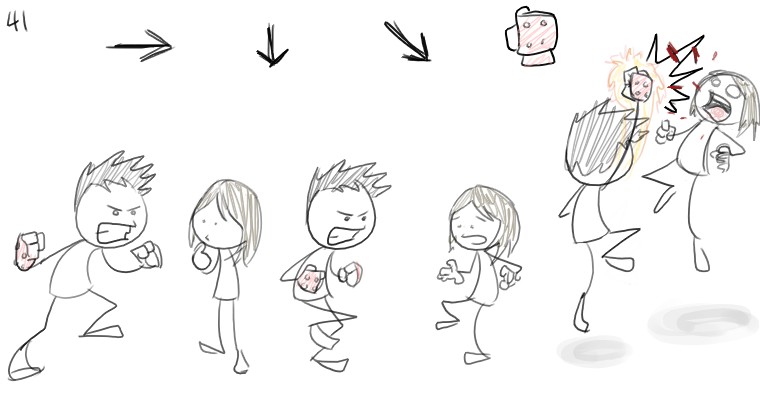 Courtesy of James Kim. Check out his site, it's pure magic.

In the real world, this helps my razor-sharp wit, as well as my ability to catch a falling glass before it hits the ground :D. More importantly, it taught me how to be quick on my feet, especially under pressure.

So what am I trying to say?

Play some videogames! And then, subconsciously, learn from them, use them, and become a better person, just like me.

How have videogames influenced your life in a positive way? Leave a comment and tell me!