Let’s get one thing clear: this site isn’t about other people. This is about how I make my life better on a daily basis, and how you can make yours better too. However, you don’t need to do this alone.
The groovy part about increasing the amount of awesome in your life is that somewhere along your quest, you will meet people with similar interests that will help you on your journey. Those people are super important.

A “New Friend” has joined your party!

A few years ago, I started doing Sil Lum Hung Gar kung fu. I went to this great school a couple of metro stops from my house, and was there almost five days a week for a period of six months. I got in shape, and learned pretty quickly, but something was missing: I didn’t make any friends at the school. I had my own friends outside of kung fu, and they were great, but not having a group of pals to train with was definitely a factor that worked against me. It took me nearly four years to get to where I wanted at the style, with many periods of lapsing and not going regularly.

In contrast, when I started learning Wing Chun kung fu, the only other student was this awesome guy, and now my good friend, Josh. Josh and I quickly discovered a shared interest in video games, kung fu movies, and Magic:TheGathering, so we began to schedule weekly training sessions at my house. Josh would come over, we would fight and beat the crap out of each other, then relax and play some cards.

My goal with Wing Chun was to get over my fear of close combat, and I ended up reaching that goal much earlier than anticipated thanks to my buddy. The best part? I ended up making a great friend along the way.

So what exactly am I trying to say? Well, without being too preachy or weird about it, make friends! Specifically, make friends with positive attitudes that will 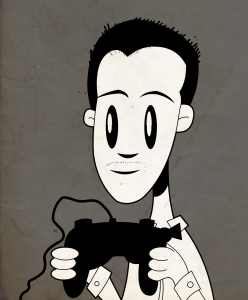 help you attain your goals. In Final Fantasy VII, Barrett didn’t make friends with Cloud because of his great attitude; he let him join his party because he needed someone with a big fucking sword to help him fight the Shinra.

You should do the same! Don’t make friends with people that will hold you back. Rather, make friends with people that you appreciate, that energize you, and that have similar goals. You’ll quickly realize that everyone will gain something out of the relationship, and like-minded people tend to create good things together. Just like Josh and I got good at Wing Chun together, you and your new friend can get good at crocheting/butterfly catching/porn collecting/whatever you want together. The best part? You’ll end up making a great friend along the way.

Be careful though. I’m encouraging you to make friends with someone, NOT use them for their abilities. The last thing you want to do is pretend to like someone, and then discard them when they’re not needed. Create a lasting friendship with them based on similar interests, attitudes and motivations, but also because you genuinely appreciate them as a person. In this way, if ever your interests diverge somewhere down the line, you’re still connected to them, still want to hang out, and still have a friend. Remember, when we gain XP, we change. Cloud and Barrett ended up becoming like family.

So what are you waiting for? Get out there and make friends. As for me, I’m writing this blog and learning about myself all the time. The best part? I’m making friends every day along the way.

Next Post: How videogames made me a better man