I’ve had a few rather humbling experiences in the last couple of months.

I tend to believe my work is a beautiful thing. Magical people, great friends, fun times. Usually, there’s no reason to worry or be upset at the work I’m asked to do.

However, there were two times in the last six months where I thought to myself: “You know what? This is fucking retarded. I deserve better.”

The first was in January when I was asked to burn DVDs and then label them, for about two days straight.

I accepted of course, but didn’t really enjoy the idea. I mean, c’mon, I went to university for six years, I have a Master’s degree, and they were going to pay me to burn DVDs? Did everyone take a crazy pill when I wasn’t paying attention?

But I went to work, and burned DVDs. As I was copying them, and labeling them, something interesting happened. Chalk it up to my Buddhism, or my meditation, or my usual easy going temperament, but I actually began to enjoy it.

I developed a certain rhythm of doing things. I put my headphones on with some lovely tunes, and slowly moved into this zone where I was completely serene. It was an odd, calm, relaxing bliss, where I was appreciative of the fact that I had some downtime, and could chill out and burn DVDs for a while. In a strange way, I began to enjoy burning DVDs, menial task though it may be.

Of course, the more I worked at Muse, the more I realized that everyone was asked to burn DVDs, so I didn’t feel singled out anymore. In fact, I felt mildly ashamed of my outburst. If the Director of Post-Production regularly walked into our office and burned DVDs, how could I do any less?

The second time my ego caused me some discomfort was in the writer’s room. I had been working with the writers of our new show for about three weeks. My job consisted of some research, lots of listening, finding the location for the room, and getting the writers’ lunch and coffee. So when I ran into an old friend in the street, and he told me he was working as a marketing manager for a big company, I began to feel quite ashamed of myself.

Here he was, this bigshot employee, making a cool 80k a year, and here I was, slightly above the job of gopher, making nothing. How could I compete with that? It was a totally shitty feeling to realize that my peers were way more successful than I was.

So I spoke to my mother about it, and vented a little. You know what she said?

“You’re not a professional writer yet, my love. Think of this as an apprenticeship, with your coffee running and lunch buying as the price you have to pay. Do you think the writers you’re working for can function without you? Of course not! They need you to take care of all the external things, so that they can focus on the writing. And someday, when you become the head writer of a TV show, you will appreciate the assistant, and treat him just like the writers are treating you right now: with respect, because you know how important he is. You will also do this because once upon a time you were the assistant too, just like once upon a time the writers you work for were assistants as well.”

I took a moment to digest this, and really let it sink in. My ego slowly collapsed in on itself as my self-worth rose up again.

“And remember,” my mom added, “to always do the work with love and appreciation. In that way, you will succeed.”

Man, my mom is good. She always manages to pinpoint exactly what I need to hear.

I hung up, and resolved to do my work with love henceforth. 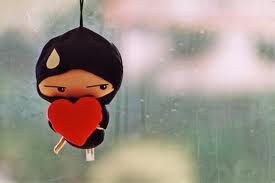 Courtesy of Andy Erikson. Click to check out her blog.

Thus yesterday, when I was asked to take a box of keys, and go through them on each door of our production office, I did. I tweeted about it being retard work, but you know what? It was satisfying.

Each time I found the right key for a door, I smiled a secret smile of self satisfaction, and thought “with love“.

Previous Post: Bungee Jumping and The Meaning of Life