It all started with a phone call.

“Hey Broski, it’s JP. I know you’re busy at work, so I’ll be brief. It’s my birthday this weekend, and I want you to be there.”

“It’s going to be kinda hard for to do that man,” I replied. “I already bought a ticket for the long weekend, I don’t know if I can do Montreal-Toronto this weekend as well.”

“Alright, but here’s the plan,” he said. “We’re going to party on Friday night, then right afterwards we’re driving to Ottawa to Bungee jump.”

I paused for a second and thought about it.

“Let me check the train schedules.”

And that’s how I decided to jump off a cliff.

Some of you may not know this about me, but I’ve been living life pretty spontaneously for the last year. Essentially, after years of staying in, studying hard, and not taking many risks, I felt like I was letting life pass me by.

To rebel against this, I started doing things that were completely out of character for me, and pushed my boundaries regularly. Since July of last year, I partied in Ibiza, went to a 3 day ayurvedic meditation retreat, took a course on attracting women, put on 20lbs at the gym, wrote a pilot script, moved to Toronto for a job, and most recently went bungee jumping.

I live by a slightly modified carpe diem to make sure I don’t burn myself out.

The key is to live life to the fullest, and do whatever I want to do, as long as:

1. I can afford it. This is important. I don’t want to max out my credit card on an awesome vacation, then spend then next 3 years suffering and trying to pay for it. If it’s just a little more than I can afford though, I’m definitely game.

2. It doesn’t hurt anyone. While I can’t necessarily control how other people feel, there are certain boundaries I won’t cross because they will intentionally lead to someone else’s suffering. For instance, I recently had a woman with a boyfriend make a pass at me. She was hot, and wanted to fuck, but I walked away, because I don’t meddle in other people’s relationships. One can argue that she’s going to cheat on him regardless, but I don’t care. She’s not cheating on him with me.

After my phone call with JP, the first thing I did was check the train and bus prices. Turned out I’d be able to make it in time if I took the train, and it was also affordable. Rule #1? Check.

If I jumped, no one was getting hurt besides possibly me. Rule #2? Check.

And that’s how I went back to Montreal for 5 hours before jumping off a cliff.

Friday came around, and I caught the train at Toronto’s union station at 5pm. Took a nap, read a book, and got home in Montreal at 10:30pm. I had a short feeling of nostalgia as I walked through my apartment, but I didn’t have time to indulge it. I quickly grabbed some flip flops, a couple of necessities I had forgotten, then rushed over to my sister’s place.

Had a great reunion with my friends and family before heading out to the super party. Drinks, shots, a little bit of dancing, met a cute girl, then we headed out to the Orange Julep for some post drinking junk food.

At this point, one of our cars wouldn’t start, so we boosted it with the other car. 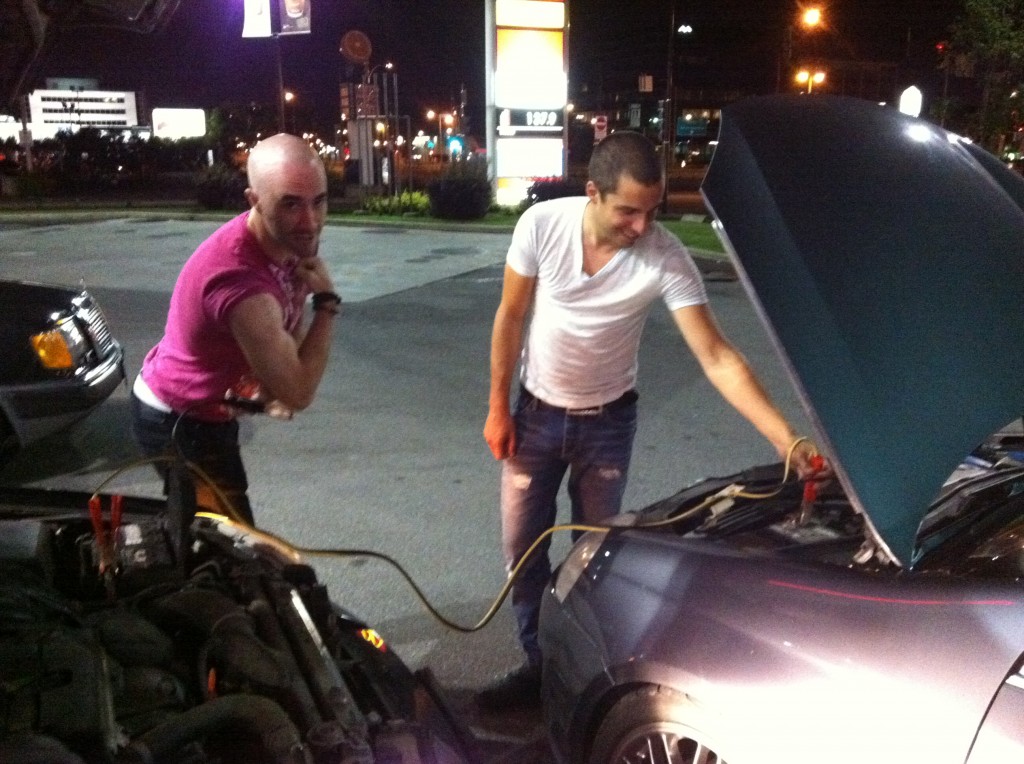 We drove straight through til 6:30am, with a short stop while taking the ferry, til we got to to Wakefield and the Great Canadian Bungee.

After some negotiation because we missed our jump time by a half hour, they fit us in at 9am.

Cue some collective napping in the car.

This is what it looked like in the early morning light. 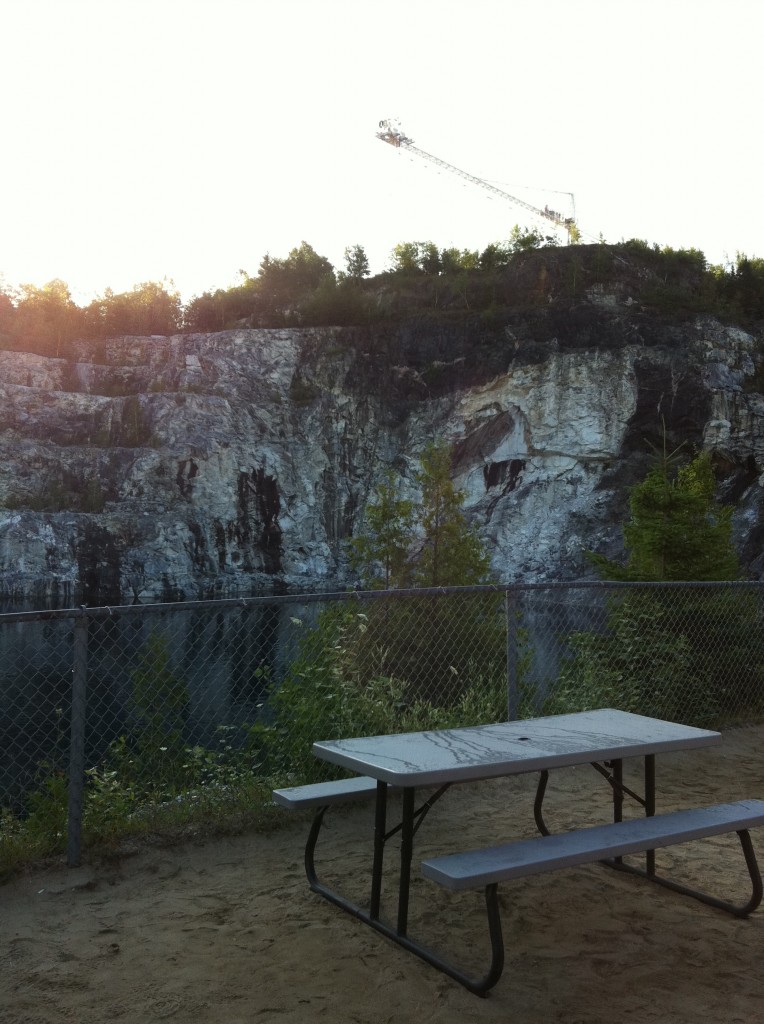 And then I did it.

Bungee jumping is crazy. Contrary to popular belief, there is very little to no whiplash. Instead, I felt some slight pressure in my head afterwards from all the blood rushing to my face, and from hanging upside down for a couple of minutes.

When I walked onto that crane, there was never a moment of doubt. I didn’t think for a second that I might not jump. I just climbed it, watched the other people plummet, and enjoyed watching the screams and laughter. When my turned came around, I shuffled up to the front, and got locked in.

I had the option to get dipped in the water, but decided against it. I figured the shock of falling at a speed of 80km/h during a 200ft drop would be more than enough to get my adrenaline going.

Once all my straps were checked, I was told to walk to the edge, and have the tips of my feet lean over.

CLANK! The gate locked behind me, and the guy yelled “READY! FIVE FOUR THREE…”

“Oh shit!” I thought, and had a split second of panic, staring down at the pool of water an infinite distance below me.

And then I was off, and falling.

It was an incredible sensation. Everything went quiet, there was just the feeling of the wind in my face, and the sight of the water rushing up at me ridiculously fast. It was almost calming and soothing, in a fucked up adrenaline junkie kind of way.

Just as I was about to touch the pool, the bungee reached its max length, and I was pulled right back up. This time I was jolted out of my reverie, and screamed in pure joy at the second rush, which comes at the apex of the ascent. The cord pulls back, and you rise until you reach the end of it. There’s a split second of “OH SHIT” as you float for that fraction of time between reaching the top and falling again.

This time you know what to expect, and it’s an awesome screamer of a fall.

When the jump was over, we drove to my buddy’s place in Ottawa, ate, and spent the afternoon chilling by the pool.

Memories: a lifetime’s worth

Next up, we’re swimming with sharks.

Do you guys take risks? Have you ever done something crazy that you enjoyed/regretted after? Leave a comment and tell me all about it. I’d love to hear about the insanity you guys are up to.