We’re having a coffee downtown. I’m trying to keep a straight face while we talk. Things are not going well.

“Well, I used to work as a receptionist at a spa,” she replies. “I don’t do that anymore. I’m looking for a job now.”

Oh man that sucks. It’s hard to find a job in this economy.

“I guess you’ve got lots of free time,” I say. Let’s dig a little deeper. “Maybe to pursue your interests? What do you do for fun?”

Aaaaaand we’re done here. After an excruciating conversation, I was willing to say this date was a failure, about 30 minutes after it started. Why?

Because I had finally met a woman that was too dumb for my penis. 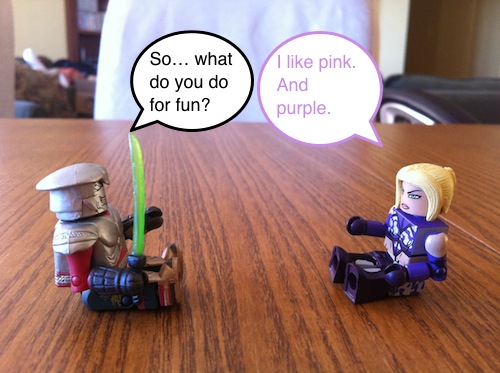 After I became single in 2010, I decided I was only going to date hot women for a while. My criteria: she had to be physically gorgeous (keeping in mind, of course, that we all find different things gorgeous).

That was it. Sexy body, sexy face, and I was going to be a happy man. It made sense at the time: if I was going to work hard to hone my social skills, why not go for the epitome of physical beauty?

When I decided I wanted a girlfriend though? Everything changed.

I’ve been on a couple of dates recently, and I am really impressed by how much I care about her intelligence, and how much dumb girls turn me off. That conversation you read a few seconds ago? That was a real quote. Her hobbies include, amongst other things, Facebook chat.

I’m going to say that again.

You can’t see my face right now, but there’s a huge bulging vein in my forehead that’s coming to life, as I seethe with rage thinking about her comment. When she said the words, I had to hold myself back, so as not to scream “FACEBOOK CHAT IS NOT A HOBBY!” right in her face.

Saying it’s a hobby is like saying drinking water is a hobby.

Sigh. When did I become less shallow? 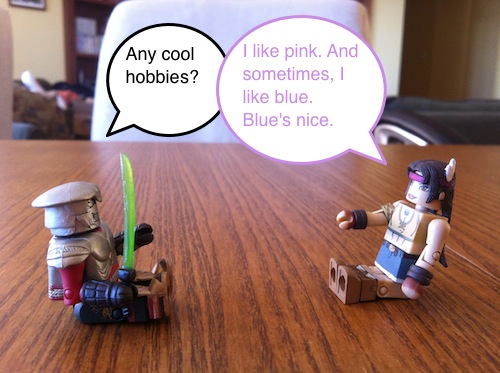 She Needs To Touch My Mind Penis

I was in a hypnotherapy session a while back, and I discovered something startling about myself: I don’t equate physical looks with beauty.

It sounds farfetched, I know. I couldn’t believe it either. It came about during a value elicitation, where my hypnotherapist was making a list of what was important to me in a woman.

Girl at the club? Hot.

All of my ex-girlfriends? Beautiful.

I checked in with my friends, and discovered that most of them felt the same way. One of them summed it up as follows:

Physical beauty is the first criteria you use to determine your initial attraction. How she acts afterwards will seal the deal.

So, although as a man you screen for attraction through looks, her actions and personality will determine your interest down the line.

I’m Not A Saint

Now don’t get me wrong: I’m not saying if she looks like a beetle but has the personality of an angel, I’m in. That’s wrong. Ideally, she’d be a great mix of both. But a woman who’s born with a great nose isn’t necessarily attractive.

In fact, while at a salsa class Monday night, my friend Sam asked me what my type of girl was.

“Dude, I’ve seen you date all kinds of girls before. Blone, brunette, slim or really curvy. But you never told me what your type was?”

“My type?” I replied. “I don’t have a “type” physically. Sure, I have a slight preference for curves, and a bit of a boob fetish. But the truth is, my type is two things. First, smart is sexy. So she has to be smart. Ideally, as smart as I am, or smarter, although I can settle for a bit less smart too. No dumb girls whose only interests include Facebook chat.”

We both laughed at that one.

“Second, I like a girl who cares about herself enough to want to look good. She doesn’t have to be perfect, because I’m not, but I hit the gym 4-5 days a week, and eat pretty healthy to stay in shape. It’s a mindset. If she eats healthy, exercises a bit, and takes care of her body, that works for me. It means that as we get older, and it becomes more important to stay healthy, she’ll be ready to put the effort in.”

As I’m realizing more and more, if she can tickle my brain in the right way, she can tickle other parts of me too. Girls that can’t carry a conversation, or can’t keep up with my silly sense of humor, can’t keep me interested.

And before you confuse me with some education elitist, when I say smart, I don’t mean she has to have a postdoc. Smart, to me, is not necessarily about memorizing lots of data. It encompasses the ability to listen, to learn, to be part of a conversation, and most important of all, to be curious.

The bonus of a smart and curious girl: in my experience, they’re willing to experiment in the bedroom. If she’s into the kinky stuff I like in bed, and a total freak between the sheets, physical appearance gets shoved into the back seat to make way for her latest fun fantasy.

I’d rather have a girl next door who’s into that weird thing I like with the Pepto Bismol and llama, than Angelina Jolie’s lookalike who only does it missionary and lays there like a starfish.

Truth be told, the sexiest thing about a girl really is her mind.

That’s where she keeps her dirtiest fantasies. 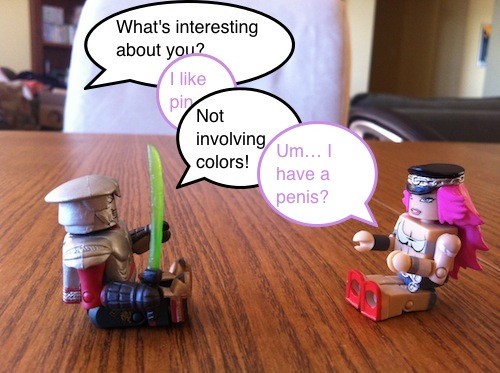