My girlfriend and I broke up last year, I haven’t hooked up with anyone since. Last week I went on a date with a girl I met online, and we ended up going back to her place. But I couldn’t get it up! I’ve never had this problem before, and I don’t know what’s going on. My ex and I never used condoms, and I think I can’t stay hard with a condom. When I pulled the condom out, I started to get nervous, and lost my hard-on.

What do I do?
Timmy”

Wow Timmy, that’s heavy stuff. Thanks for sharing buddy, it’s not easy to talk about erection problems. Let’s deal with the issues one at a time. 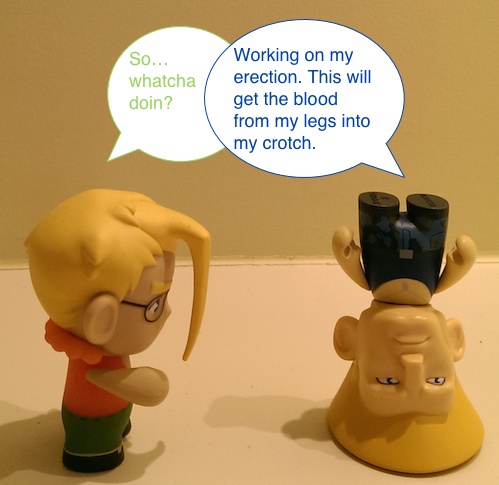 Personally, I love condoms. They let me have sex with whoever I want whilst protecting me from a bunch of diseases. It’s like having a giant shield for your penis, which still lets you have fun. Pretty strong invention there if you ask me.

But I hear people complain about condoms all the time.

“I can’t feel anything”, or “I lose my erection when I use one”, or “it feels like I’m having sex with a garbage bag.”

The truth is, a condom is never going to feel as good as unprotected sex. That doesn’t mean you should stop using them, of course. You just need to accept that not catching an STD comes with a caveat.

The problem is, as Timmy mentioned above, a lot of guys can’t get it up when the condom comes out. I have a solution, which I’ve used for years, and is so effective it’s even made it into mainstream Hollywood movies.

In case you missed it, here’s the solution:

Seriously. That’s the best way to deal with it.

Most men who have trouble with condoms start to associate the contraceptive itself with a negative experience. You put one on, lose your boner, have a shitty time. Next time around, you remember the previous bad experience, and get nervous because you’re worried you won’t be able to stay hard again. The nervousness increases when she pulls out the condom, and then you’re Mr Droopy instead of Mr Happy all over again.

Pretty soon you’ve got this Pavlovian response where just thinking about a condom makes you softer than Kirby.

Tricks to Use When You Can’t Get It Up

Here are a couple of other tricks that help, in case the condom isn’t the only reason you’re having trouble.

Third, learn to relax. Easier said than done, I know. There are a couple of methods you can use, like self-hypnosis, or meditation, or yoga. My favorite is deep breathing, which I learned during yoga.

When I start to feel nervous, I take a quick bathroom break, then spend two minutes taking deep breaths. 4 count in, hold for 2, and 4 count out. By the time two minutes are up, I’m relaxed and ready to get back in there.

Fourth, have her help you out. Remember, sex is a co-op game. Direct her towards your penis, and see if she’s got some moves that will wake you up. 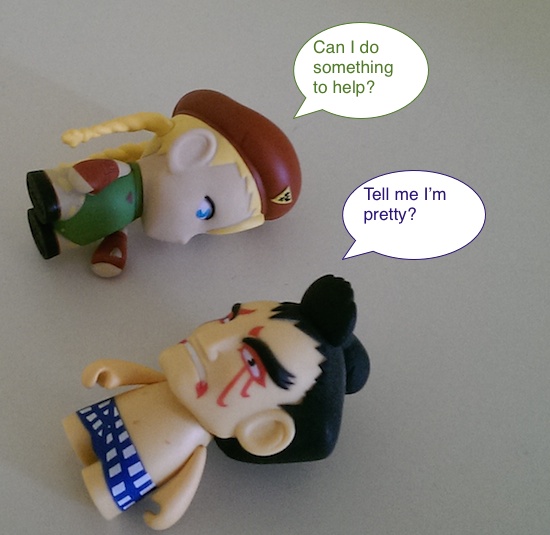 Fifth, accept that maybe you’re tired/drunk/nervous, and it’s not going to happen tonight. Maybe you’re tired, or too drunk, or sick, or your head is pounding, or you’re starving and are low on energy, or are under a red sun (hint: only if you’re Kryptonian), or you’re holding in a major #2 and really have to go.

Maybe you’re worried about pleasuring her, and making sure she’s enjoying herself, or you’re worried that your penis isn’t big enough, or that she might not find you attractive without your clothes.

Don’t try to fight it, you’ll only feel worse. Make out with her, maybe go down on her, and tell her you’ll have sex in the morning. Most of us have great morning wood.

So Timmy, what’s important isn’t being able to get it up or not. It’s how you deal with it when it happens.

You can either let it ruin the experience that you two are sharing, or…

You can relax, let it go, and enjoy the fact that there’s a wonderful woman in your bed who likes you enough to get naked with you. Let your penis take a day off.

The rest of you will still have fun.

Previous Post: How to Never Run Out of Things to Say When You Talk to Women

Next Post: My girlfriend and I have no common interests