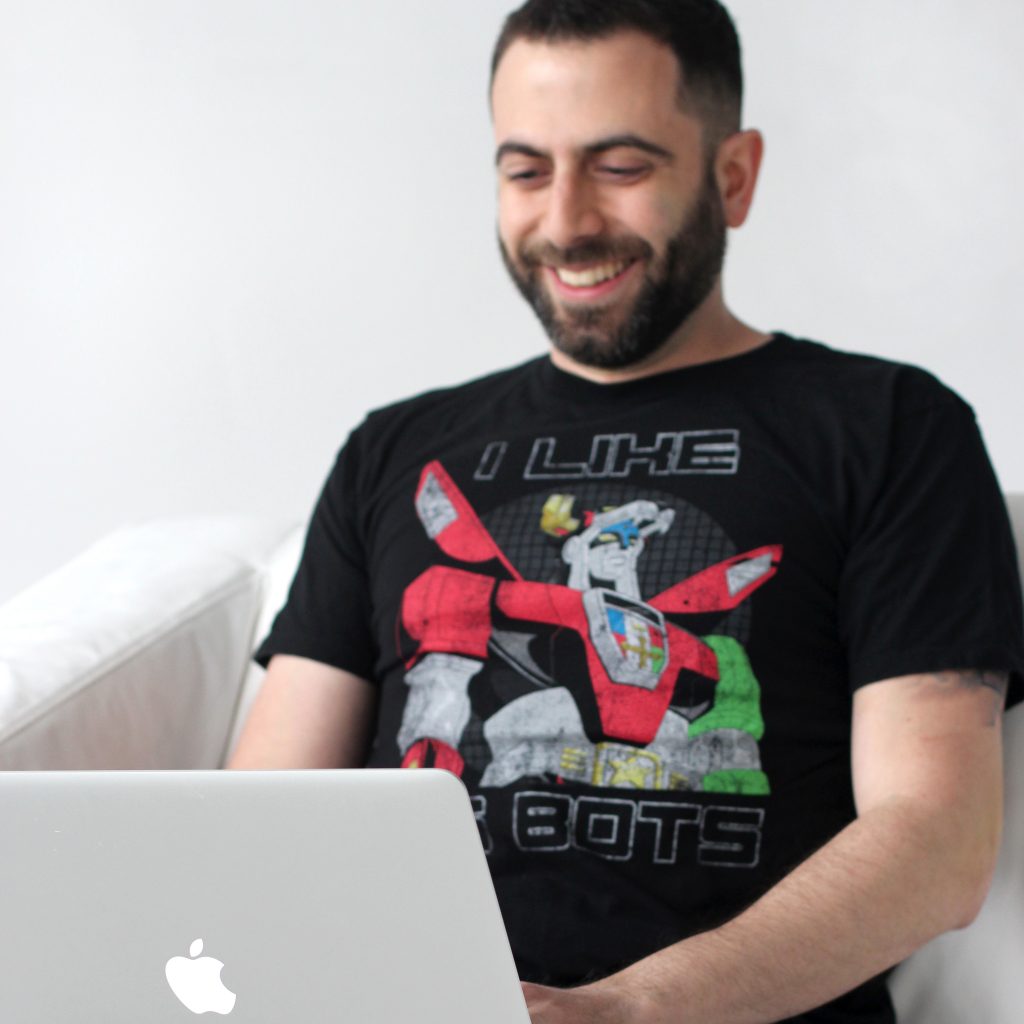 In my early 20’s, I had a lot of female friends. In fact, I’d say nearly every woman I met wanted to be my friend. People around me thought it was awesome that I was so popular with all these women. There was just one problem.

I was in The Friend Zone with every single one of them.

Not one of them wanted to date me. In fact, there was this one girl I was really into. We would go out for Korean food every couple of weeks, and I kept thinking how awesome it would be if we dated. So one day, after 6 months of hanging out, I asked her on a date. You know what she said?

So today’s post is about how to avoid the Friend Zone, and not end up in the same situation as me.

What is the Friend Zone?

Let’s get deep for a sec.

According to the Social Exchange Theory, most human relationships can be characterized as exchanges.

In good relationships, the exchange is even, and your expectations are met: the effort you put in is rewarded with something of equal or greater value. For example, you help your friend move, he takes you out for pizza. You give your girlfriend love, she gives you love back.

Everybody invests some energy, everybody gets rewarded, everybody wins.

In bad relationships, the exchange is uneven: the effort you put in is NOT rewarded according to what you expected. For example, you meet a woman’s needs and give her love, but she only gives you back friendship.

Welcome to what is known as the Friend Zone.

The friend zone is a bad relationship. It occurs when two people don’t feel the same way about each other, be it romantically, sexually, or other. 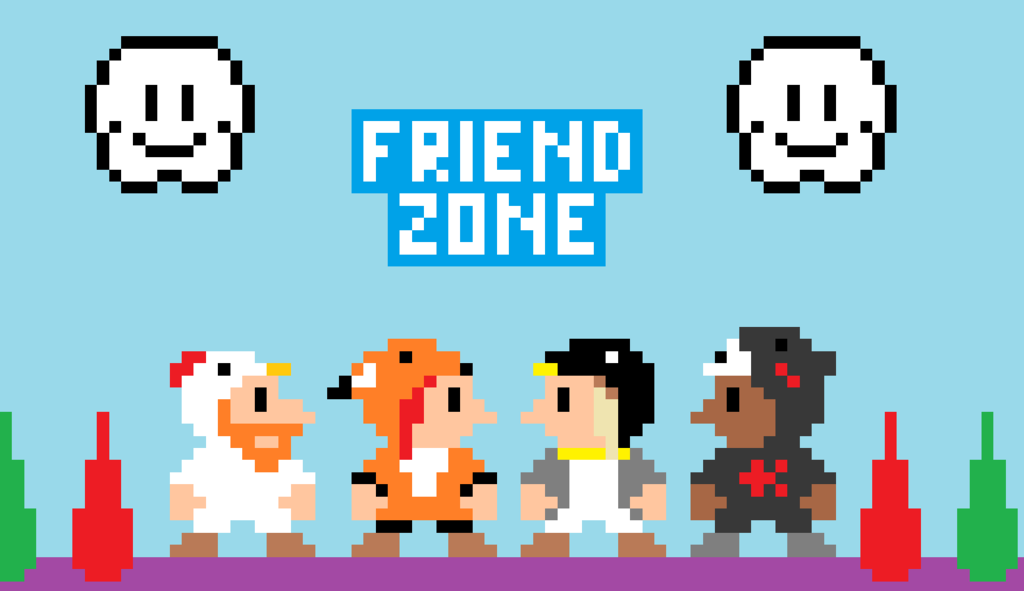 Why am I in the Friend Zone?

Just so we’re clear about it, the Friend Zone suuuuuuuuuuckkssss. But most of the time when it happens to you, it’s your fault.

Chances are you’re in the Friend Zone because you created a relationship in which you fulfill her needs, but she doesn’t fulfill yours.

“We hang out all the time.”

“When she gets dumped by assholes, I’m her shoulder to cry on.”

“Anytime she needs anything from me, I’m there.”

Of course you are. You know what that makes you? Her girlfriend.

If you want to be her friend, these things are all ok. Helping her move, watching movies together, helping her pick out clothes, etc. All that platonic stuff is just perfect and peachy and creamy. But be honest with yourself.

In this way, your expectations and rewards are met. You give her friendship, she gives you friendship right back. Everybody wins. It’s a great relationship.

If you do those things with an ulterior motive of eventually getting into her pants, or from a place where you feel she owes you, you’re screwed. If you take her out every week, and offer to buy her dinner and drinks, guess what? She’s going to take them. She’ll be really happy to have such a generous friend. Thinking that she owes you sex because of it? False. The reality is she doesn’t owe you anything.

You chose to give your money away, and didn’t ask for anything in return. You chose to create an unequal relationship, where you met her needs, but didn’t ask her to meet yours.

Do you really think if you had said “I’m going to buy you a drink now, but only if you fuck me later”, she would’ve agreed? 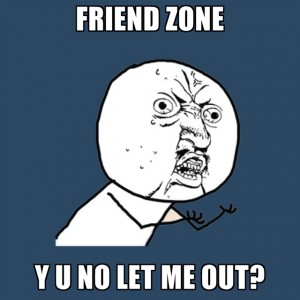 4 Steps to Avoid the Friend Zone

When you first meet a woman, she is curious about you. She doesn’t know you yet, and if she’s available, she will consider you a future prospect if you’re not physically unappealing (protip: floss, and don’t pick your nose in public).

At this point, through your actions, you move into a specific zone. Here’s how to ensure it’s not the Friend Zone:

If you make small talk, you’re nice, and keep the conversation light and fluffy, things will seem like they’re going well. In reality, you’re not doing anything special, and playing it safe. You’re going straight to the dreaded Friend Zone.

You need to try flirting instead. You do this by teasing her playfully, making fun of her in a cute way, and smiling. Sarcasm is your friend here.

You should also build some sexual tension, by making eye contact, and touching her arm, shoulder, and hand. Read my post on touching for more info!

In the meantime, here’s a good example of flirting from one of my favorite movies:

2. When you meet someone new, be brave and ask her out on a date

Once you’ve flirted and touched and shown her you’re interested in her, the right thing to do is ask her out on a date. You want to ask her out very soon after meeting, so she doesn’t accidentally think you’re just being friendly. Also, make sure you use the word “date”, so it’s obvious, and there’s no room for her to think you’re just “hanging out as friends.”

In this way, you’ll guarantee that she sees you as a potential boyfriend from the get-go, and not a generic guy for her to file under “friend”.

If you’re going to an event where you know you’ll meet women, take a female friend with you. She can boost you up, say nice things about you, and even put her arm around you in a flirty way.

As humans, we all want what other people have, and so you’ll automatically become more attractive in other women’s eyes by having a wingwoman around that appears to like you.

Just make sure she’s a friend and not some random escort you hired.

4. If she rejects you, don’t hang around and hope the friendship becomes something more.

This is the other big reason situation where you create a Friend Zone. If she says no, leave. Life isn’t some crappy Hollywood movie where if you stick around long enough, she’ll eventually realize you were the one all along and live happily ever after.

I think it’s pretty clear that the best way to avoid the Friend Zone is to never enter it in the first place.

But sometimes, despite your best efforts, she isn’t into you. You’re charming, you flirt, you touch, and yet you’re not getting into her pants or her heart. She could already have a boyfriend, or be interested in someone else, or just not attracted it to you. When this happens, remember to keep it classy.

Accept the rejection, move on with your life, and try to meet someone new.

Often enough, if you’re cool about it, she may just set you up with her friend as a consolation prize.

Whatever you do, don’t lose your mind and call her a bitch, that’s how you end up as an internet meme, reviled for all eternity by anyone with an internet connection. 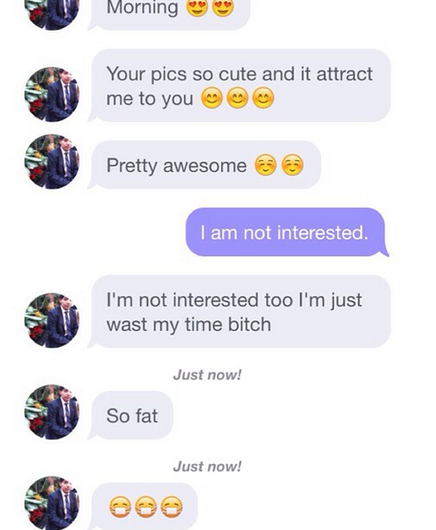 Are you struggling with the Friend Zone? Leave a comment and tell me about your experiences.

And if you feel this post helped you in some way, do me a favor and share it with your friends? Just hit one of the buttons below 🙂

Previous Post: My girlfriend and I have no common interests