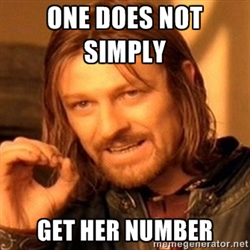 You met her at comiccon.

She was wearing a Power Girl outfit. You nervously approached in your Luke Skywalker suit, complete with lightsaber and wacky hair.

You guessed she was Batman. She laughed. You had a cool conversation, all your friends mingled for a few minutes, and everyone had fun.

But Kevin Sorbo is about to appear, and you need to meet him.

Well, now you get her number. Duh.

How to get her number

A lot of my fellow geeks have trouble with this part. It seems like they can do the talking, the charm, the shared passions, but freak out at the moment of getting the phone number.

Don’t worry homies, I got you covered. I’ve outlined the top 5 tips to getting her number below, and as long as you keep them in mind, you should be good to go.

(Note: If you don’t already know the best way to approach a girl, or what to talk about, I suggest you visit the geek dating strategy guide: get her number page and check out all the resources I posted there).

When you’re talking to a girl, she may wonder what you want from her. Maybe you just want to have sex with her. Maybe you want to date her. She doesn’t know, and maybe you don’t even know. This leads to ambiguous and unpleasant thoughts, which can all be mitigated with one simple thing: make future plans.

While you’re speaking to her, just drop a brief sentence saying where you two should hang out and what you should do.

In the example above, where you’re talking to the cutie at comiccon, the best plans to make are ones with shared interests.

She likes comic books? “We should go to this great comic book and collectables store next week.”

She likes cooking? “Oh man, let’s hang out and cook together on Tuesday. I make a killer jambalaya.”

By creating future plans, she knows what the deal is. If she’s into it, getting her number will be a sure thing.

2. Get some alone time with her

The reason is simple: some women like to keep their private lives private. They don’t want people to see them give out their number, or make out with a stranger. So isolate her, and get her number when you’re out of earshot of prying minds.

Bonus trick: f I really need to create space, but don’t have anywhere to go, I’ll slowly shift my body so that for her to talk to me, she’ll need to turn her back towards her friends. In this way, she’s focused on you 100%.

3. Get her number at the peak of the conversation

The classic mistake is to wait until the end of the conversation, when things are fizzling out, to get her number as a last resort.

The best time to get her number is in the middle of the conversation, when things are going super well. You just connected over comics? You just talked about a future date? Get her number then! There’s no need to wait.

The best part is, you’re still hanging out and chatting after you get her number, so she doesn’t feel like the whole interaction was about just that.

4. Don’t ask her for her number

Um, what? If you don’t ask for it, how is she going to know you want it?

Simple. You tell her to give it to you.

Pull out your phone, and hand it to her, then say “gimme your number.”

You can also add something about the future plans you’ve mentioned. “We’ll go rollerblading Sunday afternoon. I’m going to win.”

It’s much more powerful to make a statement, and hand her your phone, than it is to ask her for it. The only explanation I can give you is this video.

5. Text her right away

I usually text her right in front of her. I’ll say something silly, based on what we’ve talked about. For instance, last week a girl and I were joking about beards, and how Sean Connery’s beard was so manly.

My text to her was “This is Sean Connery’s beard.” We spent the rest of the conversation giggling about that.

The reason for this is because she may give her number out to a few people that night. How’s she supposed to remember which one is you?

By starting the conversation early, she’ll have you in her phone, and will recognize you when you text her in the next few days.

In the end, regardless of how you go about it, the hardest part is really to have the balls to make the move and go for the number. Don’t worry so much about being rejected, worst case she’ll just say no.

Hell, if Darryl can do it, you know you can.

Next Post: How To Have Lots of Sex Guilt-Free