Saturday night, I was out at a club with some friends. While I was there, I got a text from my sister.

“Are you home boss? Can I pass by and borrow your Wii? :D”

To which I replied:

So she went over with her boyfriend, used the spare key I gave her, and raided my place for the Wii. I made sure to tell her where everything was via text, and sure enough, she found all the wires and games she needed. The next day, we talked, and a funny thing happened. She told me my place was neat, well-organized, and uncluttered.

How the hell did that happen?!

The Art of Neatness

As you know, I own many videogames. Lots of consoles, lots of games, lots of wires. 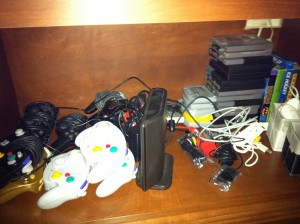 So how do I keep my place uncluttered? It’s easy. I just follow one simple rule:

EVERYTHING has its own place.

My medicine is in the top right cupboard in the guest bathroom. My N64 is on the shelf to the bottom left of my TV. My spices are on the spice rack next to the bags of rice, which all sit next to the rice cooker on my kitchen counter.

Because I firmly believe that our personalities expand into our living space. I go through many phases in my emotional states over the course of one year. My apartment is often a reflection of those phases. For instance, when you walk into my place, and it’s slightly more messy than usual, it’s probably because I had a bunch of friends over and was too lazy to clean. However, if it stays messy for more than a few days, it’s because of some inner turmoil I’m going through.

When I was studying for my Master’s (and living with my sister), my room was pretty clean. Besides the papers all over the desk, all my stuff was in the right place. My room reflected my student identity.

When I graduated and couldn’t find a job, I felt purposeless. My internal emptiness came out in my apartment. I was too lazy to do dishes, unmotivated to pick up after myself, and just let things pile up. Pretty soon there was clutter everywhere.

Think about it: if my place were messy when I felt good, imagine what it would look like when I felt bad. 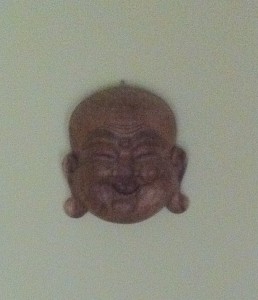 Believe it or not, besides my sizeable videogame collection. I don’t actually own much stuff.

To be honest, I’ve been living at my new place for a year and a half, and it’s still pretty empty. I asked a friend of mine with impeccable interior design taste to come over, take at look at my apartment, and share some ideas. She told me I needed two things: stuff on the walls, and stuff on the empty surfaces.

There was just one problem: I hate buying random stuff.

If I see an awesome art print that I MUST HAVE, then I get it. But buying art just to fill up my wall? No.

Which leads me to my other important belief about living space: it needs to reflect my personality.

To this date, I only have a few things on the walls: the smiling Buddha face over my bed, the kongo-rikishi at the entrance of my bedroom, the infamous Asteroids wall, a Super Mario Bros art print, and a Dragon’s Lair art print. Each of these items has a special significance for me. Either religious, or a reminder of my experience in Japan, or even as a test to the opposite sex.

So what am I trying to say?

1. Don’t be a dirty slob. We geeks have a penchant for collecting stuff, be they little figurines, videogames, comics, or whatever else your geekiness calls for. If you’re going to collect stuff, make sure there’s a place for it all.

2. Don’t buy stuff for the sake of filling up space. Buy stuff that you like, that has an emotional significance for you. In this way, your stuff becomes more valuable.

3. Do feel good about your place. If your living space lifts your spirits, then you’ll feel good when you get home, and more motivated to keep it clean.

How does your place look and feel? Are you messy as hell? Are you a neat freak? Drop me a comment and tell me!

Next Post: Stop judging yourself for being a geek