I have a major problem. I suck at flirting, teasing and bantering with girls. When it comes to approaching girls, I feel it’s easy for me to run out of things to say, which mainly happens with girls I like. Can you help?

Hey Dan, you have a very common problem. It happens to everyone at some point in their lives, men and women included. Before I learned to make proper conversation, I remember going up to a woman at a bar and having the following terrible interaction:

And she turned away, and the conversation was done.

Talking to Strangers is Scary

Of course not. The conversation always goes somewhere. That’s why you have friends, and you don’t wander the world alone, seeking stronger and stronger opponents to fight like Ryu. 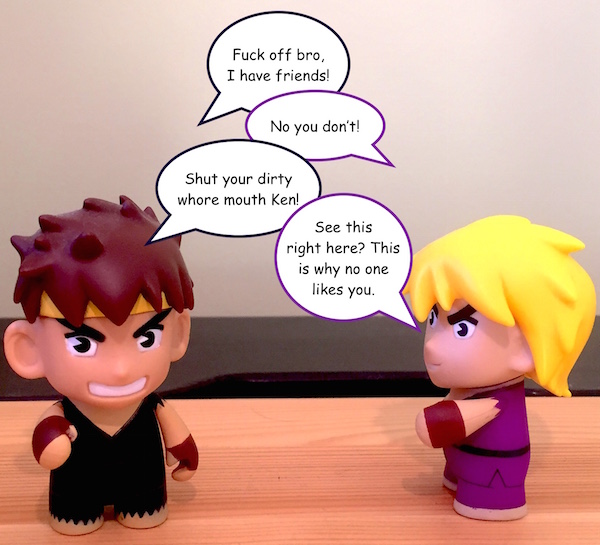 But talking to someone you’re attracted to is a different story. All of a sudden, ordinary stuff you do all the time becomes impossible. “How do I breathe? I think I forgot how to breathe!”

Here’s how you make sure that never happens, and you never run out of things to say.

When you speak to a woman, during the conversation, she will give you clues as to what to say next, by mentioning something about herself. Any detail she gives you, no matter how small, is something you can comment on. Once she gives you the clue, you can respond with any number of options.

The key though, is to listen for the clues. In other words, pay attention to the goddamn conversation, instead of trying to think of cool things to say.

As you can see in the example above, I listen to what she says, then respond based on information she gives me. All of a sudden, we’re making conversation. The important thing is, I’m present at all times, instead of freaking out in my head.

2. Remember how you talk with your friends

When we’re with friends, we naturally listen and engage in conversation with each other. We also tend to jump from topic to topic, with seemingly no connection between them, so that you start off talking about peanut allergies, and end up debating the merits of Final Fantasy VII vs X, in the space of five minutes.

If you’re having trouble figuring this out, get together with some friends one evening, pull out your phone, hit record, and leave it on the table.

Record 10 minutes of conversation, and notice how you all naturally jump from one topic to the next. Your responses to each other will probably be extremely diverse in tone, going from sarcastic to funny to ordinary to personal.

Now this is the good part: take note of how your friends and you unconsciously jump from topic to topic, because that’s how you naturally converse. Then, consciously memorize one or two of the transitions, and use them in conversation with a woman.

The best part is, you won’t be learning a line, you’ll just be remembering how you talk when you’re not freaking out because there’s a pretty human in front of you. 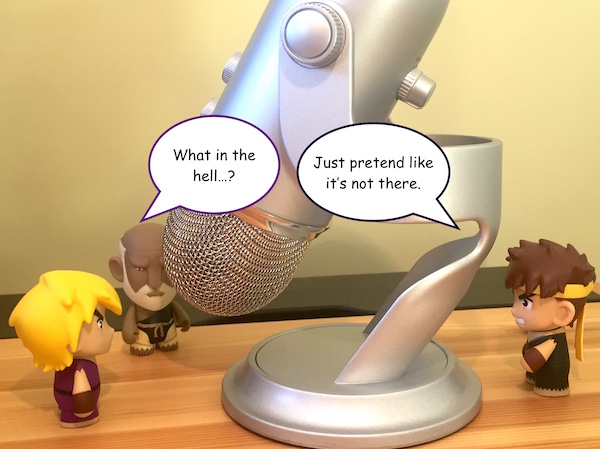 3. There is no perfect thing to say

When you talk to your friends, one of the reasons you never run out of things to say is because you talk about whatever’s going through your mind at that second.

“Man, I really like pancakes,” you’ll say. And your friend will respond “Yea man, pancakes rock.”

And then you both think about pancakes and how awesome it is you agree about loving them. Boom, what a deep conversation.

With someone you’re attracted to though, you’re constantly worried about saying the perfect line to make her want to have sex with you. We all do, but we shouldn’t.

Instead of worrying about saying the perfect thing, just say what’s on your mind.

Here’s an example of me blurting out some Matrix level “there is no spoon” stuff, when I ran into a cute girl with bright red lipstick:

Me: Your lips are very red.
Her: is that a good thing?
Me: Don’t think of it in terms of bad or good. Think of it more in terms of less red and more red.
Her (smiling): I like that.

We then spent 20 minutes talking about random things, and eventually I got her number. This happened because I blurted out what was on my mind, instead of plotting some crazy line about a stripper ex-girlfriend.

Whenever I draw a blank in conversation, my favorite trick is to grab whatever she says, then go on a tangent by saying “that reminds me of X.”

You can use it at any time, as long as your story is slightly related.

Her: I really love Thai food.
You: That reminds me of the time I was in Thailand, and learned to make curry. But I messed up and made it super spicy, so it was delicious for the first bite, then torture for every bite after.
Her: Haha that’s funny. Yea it’s happened to me too, you have to be really careful when you use chilli in cooking.

The thing is, it doesn’t have to relate specifically to you or a friend of yours. You can use the “reminds me of” trick to relate to anything: TV shows, books, movies, games, whatever.

Her: I got promoted at work this week.
You: That reminds me of The Big Bang Theory episode where Raj gets featured in a magazine and all his friends hate him. Do your colleagues hate you now that you’re the boss?
Her: Oh god I hope not. 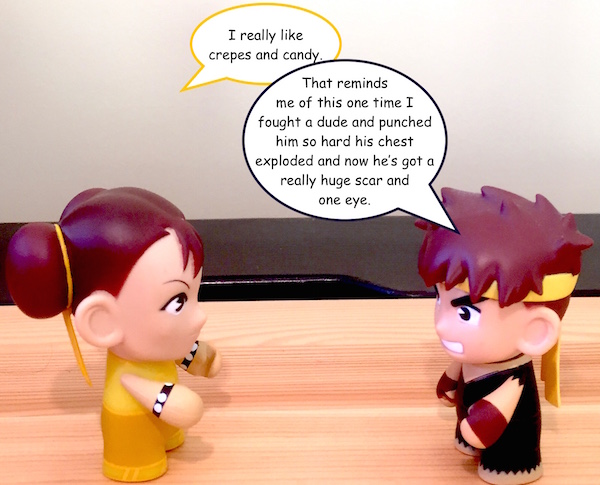 5. Prepare stories ahead of time

When all the tips above fail, and when you’re really stuck, there’s always the backup plan: stories you prepared before leaving your house.

When you’re at home on your couch, comfy as hell, think of all the cool things that happened around you recently. Maybe your cousin gave birth, or you went to an awesome Halloween party with a haunted house, or you tried the greatest burger in the universe at a new restaurant that opened up in your neighborhood.

Make note of three solid stories, and keep them handy. When conversation stalls, bust one out, using the “reminds me of” trick. It may save you in a pinch, especially if you get really nervous and draw a blank.

Hopefully these tricks will help you never run out of things to say the next time you talk to women. Be sure to try trick #2 at least once: you’ll be surprised by how well you make conversation when you’re not in a pressure situation.

Previous Post: How Videogames Help Me With Obstacles in Life

Next Post: My girlfriend and I have no common interests