After the popular article I wrote on How To Be Good At Tekken, I’ve had many players email and message me asking how to build a Tekken Flowchart. I responded to a few, and decided to compile the info into a post and share it with all of you.

Why do I need a Tekken Flowchart?

My favorite part of playing Tekken is how open-ended the game is. There’s no one way to play it: you can turtle, you can space, you can be aggressive, and you can be a mix of those elements. This is also what makes the game difficult: given how many play styles are available, it’s tricky to cover all the options, and predict how your opponent is going to play.

The game is also very momentum based. I always like to say that the player with the most confidence is probably going to win.

This is where the Tekken Flowchart comes in. A flowchart always makes you confident and secure, because you always have a plan.

Why are flowcharts so important though?

There are three main reasons. 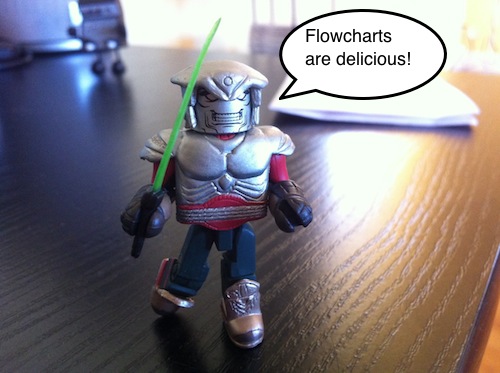 Then you won’t hesitate, you’ll just choose one option and go with it. This speed of thought will also keep the pressure up, and won’t let your opponent get away.

Second, a Tekken Flowchart is strong when you run out of ideas, or are in a high pressure situation, where your mind goes blank. For example, if you’re in a tournament, you’re going to miss combos and such because of the stress. You may even start to panic, and wonder what to do.

At that point, you run a flowchart, by trying to land a flowchart starter, and then move into autopilot. All of a sudden, your opponent is doing all the thinking, when all you’re really doing is going through motions you’ve rehearsed before. You’ll relax, feel less pressure, and free your mind up to start thinking about other things during the match.

Third, knowing all the options in flowchart situations means you’ll be able to focus 100% on the mixup, and how to break your opponent. The mental pressure is diverted from you and lands squarely upon your opponent’s shoulders.

The first step to building a Tekken flowchart is to find a flowchart starter. To do this, make a list of all your character’s moves that do one of the following:
-knock down on hit or counterhit. Example: Armor King’s f+2,1
-give you large amounts of frame advantage on block/hit. Example: Lili’s f,f+3
-put opponent in an awkward position where you can dodge his move and punish. Example: Yoshi’s 3~4

Next, for each of those, make a list of all the opponent’s options.

If he’s standing, usually he can:
-sidestep
-block
-backdash
-crouch
-press a button

If he’s knocked down, usually he can:
-stay down
-get up straight
-backroll
-sideroll
-get up kick low
-get up kick mid

Phew. That was long.

Finally, the most important stage, you need to figure out which moves of yours will beat out these options, by going into practice mode (see video below). Remember, it’s better to find moves that cover multiple options, so you don’t have to guess as much.

Let’s take an example of each kind of flowchart to make them more concrete. I’m going to use Armor King in all examples, because he has all three, and his moves are easily recognizable.

With Armor King, an easy knockdown flowchart starter is f+2,1 on hit or CH. It’s a strong mid that knocks down on any hit, but is very punishable (opponent can crouch and launch the second hit), so only use it to whiff punish, or if you’re SURE your opponent is going to eat it.

So, f+2.1. The opponent gets knocked down. The flowchart begins. My next move is:

-3+4. It beats most get up options, including kicks, get up straight, and tag. If the opponent does one of those options, he gets floated, and I followup with BT d+2, crouch cancel d+2 B! into a juggle. If he stays down, it does ground damage, and he enters the next flowchart, where he’s at Armor King’s feet.

-Sidewalk. This will avoid the Tag Crash if your opponent has rage, and you can juggle him in the back for crazy damage.

-I do dash 3+4. It beats the backroll option, and leads to the same juggle as before.

Here’s a brief video of how it works: you’ll notice the 3+4 beats most options, and I make an adjustment for the backroll with a dash, because it whiffs.

Basically, for you to create something similar, you would need to do what I did, and go through each escape option in practice mode, then come up with a creative solution for every one.

The Frame Trap is one of the most important setups in Tekken. It’s a bit complex and mathematical, but I’ll try to break it down.

To start a frame trap, your opponent either blocks a move, or eats a move, that puts you on plus frames. This is the number of frames that’s added to your opponent’s next move. You follow up the plus frames with a move that’s quicker than your opponent’s fastest option (their fastest is usually a 10-frame jab).

If the opponent uses a 10-frame jab afterwards, it will take his 10-frame jab 16 frames to come out. Why? Because Armor King is at +6.

This means that Armor King can do any move that’s 15 frames or less, and his opponent still can’t cut through. That includes slow mids, and grabs.

So the flowchart here is to take advantage of the frame advantage. You want to either continue with another move that gives you plus frames, or you want to start a mixup, by incorporating grabs, mids, and lows.

Watch the following videos to see it in action.

This option is the most complex and difficult one to pull off. It relies on spacing, predicting your opponent’s next move, and often a high risk/high reward gamble on your part.

With Armor King, the prime example is d+2. When the opponent blocks d+2, you’re at -2, and you’re both in full crouch. If you both mash a WS+4, the fastest option, they’ll win, due to your negative frames.

What you want to do then, is do a d+2 at max range. This will allow you to move, and avoid whatever button the opponent presses. This is where the prediction comes in.

However, certain characters like Lars have a WS+2 that goes really far, and catches Armor King’s backdash. In this case, you need to sidestep and whiff punish. Beware! It’s risky, because there is no blocking during a sidestep. If the opponent anticipates which direction you’re going, they can launch punish you for it.

The End… or the Beginning?

That’s all I’ve got for you today folks. Be sure to go into practice mode and try some of these options out. Remember, a flowchart isn’t the only solution to Tekken. There are many other factors, including confidence, tempo, spacing, and mind games.

A flowchart is just a great place to start, and will make all other options easier.

Next Post: GutsyGeek speaks at WDS in front of 3000 people