It’s the day after Christmas, and all is well in my world. I don’t really have a lesson to share today. Instead, I’m going to share a very personal story.

People have been asking about my book, about the slowdown in my mailing list emails, about the irregularity of my posts.

I had just finished giving my talk at WDS2013. I told the world I had completed my book, and I was basically on cloud 9.

Things were perfect. I was kicking ass at work, kicking ass with the blog, dating a great girl. Perfect.

My life had been piling up while I worked feverishly on my book. I hadn’t been playing games much, or doing my physio to fix my new shoulder injury, or exercising right, or even eating healthy… So when the book was finally finished, I decided to take a month off, and pull my life back together.

I began catching up on all the things I had been missing, and was doing a great job of it, when things slowly began to unravel.

My girl and I broke up. My shoulder injury got worse and worse. My eating habits turned into junk food central.

And worst of all by far: I was having trouble writing. Even now, while picturing the way things felt, I have trouble completing this sentence.

It’s almost as if I had channelled all of my body’s creative energy into my book, and I had no more left inside of me. Every topic I wanted to write about felt rehashed, every idea a ripoff of a better one, and every turn of phrase was predictable.

In short, I was bored of my own writing, and I didn’t want to write anymore. At all. Ever.

Which is weird, coming from someone whose writing is his living. I write for my blog, I wrote for my book, I write and create marketing content all day for my day job… so how does someone who loves writing lose his love of writing all of a sudden? And worse still, what the hell do I do now?

My writing wasn’t the only part of my life that was affected. I began playing fighting games with an air of detachment. I didn’t want to win as much, preferring to build flowcharts, find weaknesses in my opponents’ game plans, and just experiment on them.

When I won the Tekken tournament in October, I barely felt anything.

Even my passion for women faded. I would go out, meet girls at clubs and bars and parties, as per the usual. I’d engage them in conversation, bored, knowing how it would play out, doing it more out of habit than anything else.

I’d always get a number, but I’d never give her a call.

I could see things happening around me, but I was constantly filled with a state of apathy, for everything.

The world was in color, and I was in grey.

And I didn’t know how to get out.

I tried to escape. I watched all of Transformers Prime, which is awesome. I played fighting games with my friends as often as possible. I even created Octoberquest, in an effort to get out of my rut, and signed up for salsa classes afterwards, which I attended every week.

My house began to reflect my state of mind. I wasn’t doing dishes, wasn’t tidying up after myself, wasn’t sorting through my bills. Things were piling up, so much so that my cleaning lady would just clean around the piles, not knowing where everything went.

My bedroom, which is my sacred personal space, degenerated into piles of dirty laundry.

There was something happening deep inside of me that I wasn’t addressing.

I’m very good at self-reflection. It’s one of my natural talents. Couple it with years of therapy, and I can usually tell when something’s wrong with me, and what behaviors I can adjust to feel better.

But when I’m stumped, I pay a visit to my friend, a hypnotherapist. I told him what was up.

After some gentle probing, he put me into trance, and it was like something exploded in my brain. For the first time in months, I saw, clearly, what had been lurking in my subconscious.

When I read the final version of my book, I was terribly worried no one would like it. Worse still, for some reason, I was convinced I’d never be able to sell, it would be a huge flop, and a waste of time.

To protect myself, I began procrastinating. After all, if I never finished my book proposal, and never found an agent, no one would be able to tell me my book sucked, right?

With women, it was even more insidious. I was on the hunt for a girlfriend. By convincing myself I was bored of all of them, I could reject them before they rejected me, and thus never give them a fair chance. If she was already eliminated before I get to know her, then I never have to worry about her hurting me, right?

My personal space, which is often a direct reflection of my mental state, got cluttered as a consequence. If you ever want to know how I’m feeling, come check out how messy my apartment is.

So I had finally identified the problem: a subconscious fear of success. The funny thing with crazy subconscious stuff is, the moment I figure out what it is, and address it, it tends to go away very quickly: you can’t hide under a flashlight.

The moment I realized what was going on, a huge weight was lifted from my shoulders. I left my hypnotherapist’s place, and went home with a spring in my step. I had some dinner, chilled out, and went to bed just before midnight.

At 6am, I woke up with a sudden urge to tidy up. By the time I went to the gym at 8am, I had cleaned up my entire apartment, and even had a load of laundry going.

I spent most of the week writing. I finished my free giveaway (expect it soon if you’re subscribed to my mailing list), I wrote parts of my proposal to get an agent. I caught up on all my work. I even went out and got a cute girl’s number. And this time, I actually called her.

So this is me, at the end of 2013, excited for the new year. My imagination’s back, my lust for life has returned.

I even changed my hairstyle, for the first time in 10 years.

Now, I’m not saying this fear won’t come back, because it might. The difference is this time around, knowing it’s there, I’ll be ready for it.

But one question remains: how did I write once a week for my blog, without inspiration or excitement, and yet create some of the highest rated posts I’ve ever had, like this one and this one?

That, my friends, is a story for another day. Follow me on Twitter/Facebook so you don’t miss it. 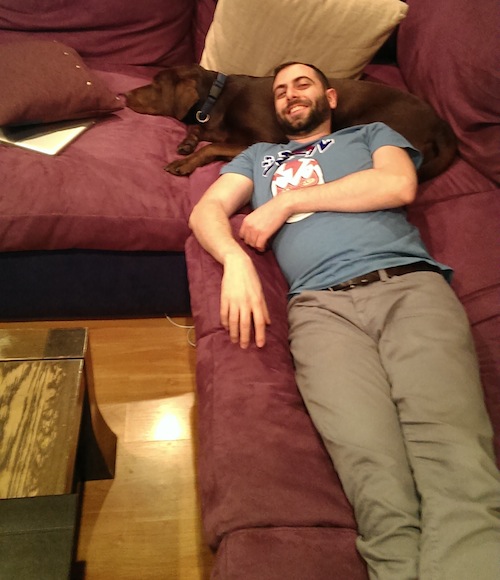 Previous Post: The One Technique to Improve at Anything